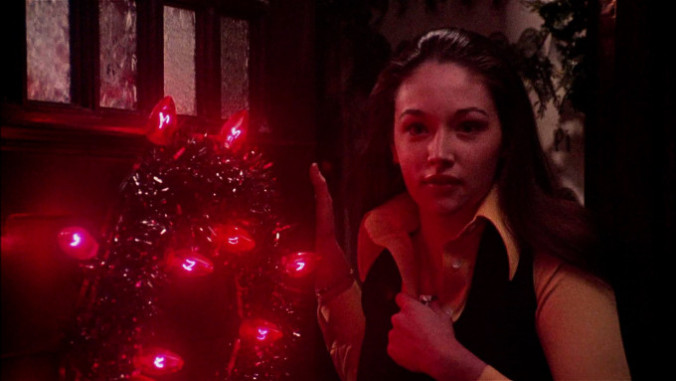 Jess Bradford is one of the few “final girls” who isn’t defined by her purity. In fact, she’s a sexually active young woman living a complicated, dark life. Despite her boyfriend’s attempts to steer her destiny, Jess pushes back and clings on to her autonomy.

She is leagues more unique, radical, and self-sufficient than any other “final girl”. When the police demand she leave her sorority house because a killer is hiding there, she defies them and, instead, risks her life to rescue her housemates. Sounds very Aries, if you ask me.

If there were a “final girl” I wouldn’t bet my life on, it’d be Sally Hardesty.

Although Sally is often named as one of the quintessential “final girls” in the horror movie genre, she’s perhaps the most passive of them all. Yes, she survives, but mostly because of dumb luck and plot armor.

She never fights back against the enemy, and doesn’t even get to kill Leatherface. Then again, getting kidnapped by cannibals isn’t something an everyday girl expects to happen. She gets props for remaining tough and still attempting to escape, when most of us probably would’ve given up all hope from the get-go.

As far as horror movie heroines go, Nancy Thompson is iconic. Initially, nobody believes Nancy when she tells them a metal-clawed man in an ugly sweater wants to murder her in her sleep.

But clever, insightful, cheeky, and ballsy, doesn’t wait for anyone to come to their senses and rescue her. Instead, she takes matters into her own hands. With nothing but diligence and a fierce attitude, Nancy teaches herself how to conquer her fears and enemy. She then passes on that knowledge to others.

As a true testament to Nancy’s epicness, the future “final girl” in the sequel still needed Nancy’s help in order to survive and defeat Freddy Krueger. Additionally, she is very kind and compassionate.

Many “final girls” live not solely due to their own wits and capabilities, but because a male figure (typically a father or boyfriend) rescues them in the end.

Laurie Strode falls into this category of “final girls”. Compared to the others, Laurie isn’t as tough and is terribly self-conscious. Her best trait seems to be her heightened sense of awareness for her surroundings.

In the sequels, however, she grows as a character. When her son’s life is threatened, she proves she is just as strong-willed and capable as any younger “final girl”.

By horror movie standards, Buffy Summer should’ve been the first or second character dead by virtue of her personality alone. Always the one to defy expectations, Buffy slays through the stereotypical “final girl” tropes.

She’s unapologetically feminine, sexy, and headstrong. She kicks vampire ass without breaking a nail, and still has time to party with her friends and make-out with her boyfriend. There are times where we see her struggling with her fears, but she always comes through victorious and proud.

To quote Jason Middleton, Buffy “gets to have sex with boys and still kill the monster”.

People say you need to be a virgin in order to be considered as a “final girl”. Well, Sidney Prescott says screw that! She managed to get the D, and lived to tell the tale.

Sidney’s got all the best qualities of a “final girl” and more – reliable, brave, resolute, and bright. She may seem introverted and shy, but that’s really because she doesn’t let her guard down – a characteristic that helps her survive all 4 movies. Besides that, she’s impressively tough as nails.

Try as Ghostface might, this lady is simply unbeatable. Sidney is the “final girl” all the other “final girls” aspire to be, and the one the killers regret targeting.

LIBRA
I Know What You Did Last Summer

Julie James, like Laurie Strode, survives the film mainly because her boyfriend comes to the rescue. She embodies the typical “final girl” in that she is virginal, modest, and moral.

Her weakest trait is she can be quite unsympathetic and whiny, even for someone targeted by a serial killer. Fortunately, she is also attentive and smart. She proves she is, deep down, still a loyal friend by keeping her friends’ deadly secret, although it’s eating her up inside.

People (and crawling demonoids) should really think twice before messing with Sarah Carter. A true survivor, Sarah manages to escape the cave of horrors by wounding her best friend, Juno, and leaving Juno for the monsters to devour. Normally, the audience would feel bad for Juno, but then we find not only did Juno sleep with Sarah’s husband, she indirectly caused the deaths of Sarah’s husband and child.

Sarah’s vindictive, durable, and intense nature makes her a terrifying and memorable “final girl” that you don’t want to cross.

Her self-awareness is what makes Max Cartwright the goofiest and most charming “final girl”, but what makes her interesting is that her love interest isn’t really a boy – it’s her mom.

Max spends the majority of the movie trying to save her mother from a deadly fate, as her friends sacrifice their lives for both of them. This leads Max to become a curious case of both selfless and selfish.

CAPRICORN
Cabin In The Woods

Dana Polk may seem like your average, sweet, innocent “final girl”, but don’t be deceived! This chick is actually difficult to figure out.

Most people would expect a true “final girl” to be self-sacrificing and goody-two-shoes, but not Dana. When tasked with the burden of killing her friend in order to save the human race, Dana wavers. She resolves humanity isn’t worth saving, and ends up smoking a joint as she watches the world burn.

Is there even a “final girl” that also happens to be the villain?! Mia Allen says yes!

Introduced to the audience as a recovering junkie, Mia gets possessed by a demon, and proceeds to murder her friends one by one. As a human, Mia is superstitious and flaky. As a scary ass demon, she’s persistent and intimidating (plus unintentionally hilarious and flexible).

In the end, a pissed-off Mia becomes unpossessed and slices the demon with a chainsaw.

Unlike the other “final girls”, Jay is given a clear-cut opportunity to escape the monster without having to worry that it’ll come back to haunt her. All she has to do is have sex with someone, and the monster will leave her alone and focus its sights on that person instead.

However, Jay’s conscience and morals prevail. She refuses the easy way out, and survives in another way – one that doesn’t involved purposely harming others, especially the boy she grows to adore.